They used to say that the last Soviet/Russian military personnel left the Baltics in 1994, but their last secret remaining presence stayed until 1998. As a young child visiting Latvia for the first time in 1995, I didn’t fully understand what the secret 100 acre closed city of Skrunda was about, but one of my earliest memories of Latvia and introduction to radar technology was the huge explosion of the 400 foot tower and transmitter of the “Darjal – UM” radar building, dubbed the Skrundas locators. Costing millions of dollars and executed by the U.S. firm Controlled Demolition Inc., the public and government were eager to do away with this symbol of Soviet influence. And watch an enormous explosion. So much excitement surrounded the event that, in typical Latvian fashion, a musical score was composed for the occasion. 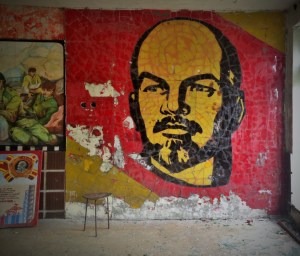 The eerie remains of an abandoned Soviet past are all that remain now in Skrunda’s secret city. (Images by Duncan Brown/Bradley Jardine)

Mainly used to look for missiles coming from Western Europe, the secret city of Skrunda-1, north of the town of Skrunda, was built in the 1960s as a radar station. It housed two Dnepr radar, one of the most important early warning radar stations for the Soviet Union, to allow for listening to objects in space, as well as track incoming ballistic missiles (ICBM). After the fall of the Soviet Union, most of the workers and residents of the radar facility returned home and the station seemingly grew quiet.

However, Russia was allowed to continue operating a working radar station until 1999, when the last Russian operatives finally left the scene. The deserted buildings of the closed Soviet city were left untouched for years. Abandoned and looted, the city that once housed 5,000 Soviet workers was an empty town, slowly being eaten away by nature and the elements.

Now Skrunda-1, named using the typical Soviet method of naming secret installations (usually the name of the nearest town and a number), is a Cold War ghost town. Left to the ravages of time, there was little hope anything would be done with this bastion of Soviet military lore. Skrunda-1 is often compared to Pripyat, the town in Ukraine used to house those who worked at Chernobyl, and just as spooky.

The local government’s plan of revitalizing the area involved an auction of the town in 2010, bought by the Russian firm Alekseevskoye-Serviss for EUR2.2 million. However, nothing was done by the winners, and the town was re-auctioned for less than half of the original price. With even more inaction on the parts of the bidders, the Skrunda municipality bought back the town in 2015 with the goal of maintaining the area, but so far, it remains as empty as it was when left. Rumor has it that half of the area is intended for military use, and the other half to lease.

However, as more and more curious tourists and locals wish to take a look at the remnants of the abandoned town, the municipality has begun charging an entrance fee to visit and wander. While other facilities, such as the Aluksne Nuclear Missile Silo and the Radio Astronomy Center in Irbene, have been repurposed or made more welcoming to explorers, this fabled acreage has been largely left untouched. No museum could do it justice but the walls of this crumbling Soviet Disneyland. There is a treasure trove of propaganda art, well-preserved in the 60 buildings still remaining, a history buff’s dream, not to mention toys, photographs, books, and other knick-knacks that harken back to a time some would sooner forget.

Have you visited any other abandoned Soviet sites? Let us know! (This article originally appeared in www.citypaper.lv)