Everyone knows, beyond the façade of the glamor and excitement of travel is the ever-lurking shadow of jet lag. It affects everyone who zips from one time zone to another and there is no escape….until now! Jet Candy, the first remedy specifically formulated to prevent and help the drag of jet lag, is now on the market and it is causing major waves in the travel industry.

We had the opportunity to speak with the genius behind Jet Candy, Ros Milani Gallieni, a veteran of the luxury travel industry and consummate jet setter, to bring you the background of the newest jet lag cure to hit the market. Ros, travel can be exhausting no matter who you are, even if you’re traveling infrequently. For someone like yourself who has traveled constantly throughout her career, what started putting the wheels in motion for a product like Jet Candy?

Having spent most of my working career at the core of this industry – after working with Giorgio Armani personally in Milan, and for Hotel designer and couturier Anouska Hempel for many years afterwards back in London. I still count both of them as my mentors. After fashion and couture, life then revolved around Ferrari Formula One Racing worldwide and all the great personalities that particular circuit brings together, so travel and life were always very close knit. Generally, with all this, I clocked up enough air miles to have had my circadian rhythms disrupted more times than I would like to care to think about. I realised I needed a solution when it then came to the current business profile, working with some of the most prestigious resorts, spas and residences in Europe, as well as a range of fine luxury brands.
What was the push that made you pursue Jet Candy’s development?

When a trip to Los Angeles came up some years ago for my niece’s graduation, my sister went into meltdown about how she’d cope with the jet lag. For years I had the same therapist for acupuncture and homeopathy and I asked him if there was anything he could suggest for jet lag so we could enjoy this important ceremony (9 time zones away). He gave me a bespoke little remedy, and I decided to take it as well as my sister, so that we were both on the same page, as it were, on arrival. This experience would then turn out to be the start of a new, very personal business project which I have now pursued for almost 10 years to get it to completion and launch. When I set out, I would never have dreamt to be launching Jet Candy at ILTM in Cannes – but thanks to the benefits of the remedy which the committee of ILTM tried and tested in advance with success, I was invited in to introduce the remedy to the world of top travel and media authorities. Collaborative partnerships are being planned every day with interested parties, and the association to corporates for their staff’s travel, and airlines is growing too. 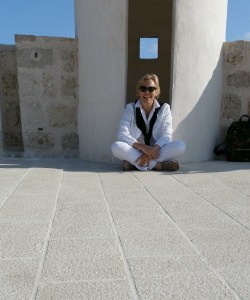 Years of world travel prompted Ros to bring her personal jet lag remedy to a wider market for friends, clients, and international resorts.

How did the Jet Candy formula come to be?

Over the years, I had batches of the remedy made up specially for family and friends to try out. I got nothing but positive feedback, and the recurring question: “where can I buy it?” So, I created Jet Candy as a fully-fledged brand – website, collateral, social media and packaging with aplomb, following precisely what I discovered works for myself and many of my circle. Homoeopathy, as a whole is all about the individual: for a lot of people it really works, and fundamentally for those people who don’t want to take hardcore medication. I have a friend, who is a well-known socialite, who likes to ski in Aspen, and she takes it regularly and gives it to her kids now too, so everyone can enjoy their holiday and get back in good shape for school and business on their return.

There are already many fans of Jet Candy! Who do you count among your loyal customers?

Jet Candy has a growing group of loyal followers. Many of my repeat customers are time-poor, travel-weary individuals at the top of their game. Thomas Hedman, film distributor, is a great ambassador for the product, and I know he’s really happy we are now producing it commercially as he can finally order it online. Other clients include renowned media who travel long-haul back-to-back, the interior designer with a vast international clientele, Michael Reeves to whom I offered Jet Candy after he was flagging on projects that involved constant flights between Europe, India and China. He was making himself really ill with the exhaustion. I gave him Jet Candy and he told me that he’d never tried anything so effective. Pam Bristow, CEO of Ona Bags in New York, considers it as crucial as her passport; never goes anywhere without it. And there are more.

Any direct competitors in the jet lag market right now?

The important thing to remember, of course, is that if you go to the chemist right now in the UK and ask for something to help with jet lag, they can’t sell anything over the counter. There’s nothing. It’s only Melatonin which is prescription-only and a lot of people are wary of it for its side-effects. So far all you’ve been able to get for jet lag is a cashmere eye mask and a cosy pair of socks. And that really doesn’t help!! 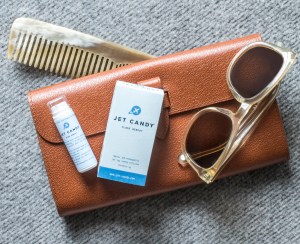 Excited to learn more and say goodbye to jet lag forever? Stay tuned for more information and our in-depth personal review of Jet Candy! And if you can’t wait another minute to start traveling and ditch the jet lag, visit www.jet-candy.com —you are three clicks away from a big change in long haul travel.