If someone told me beforehand that spending an additional $600 in flights and transportation to get to Koh Phangan in time for the famous Full Moon Party would be futile due to the death of the Thai King, I probably would have saved my money and headed straight to Bangkok. But if I had done that, I would have missed out on the most insightful cultural experience of my trip to Asia. 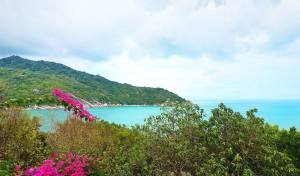 The Full Moon Party is known as one of the largest parties held every month in Thailand, supporting hundreds of small business owners and allowing thousands of tourists (I’m talking upwards of 30-40,000 people) to participate in watching fire shows, drinking buckets of alcohol for 180 Baht (or about $6 USD), and dancing along one of dozens of stunning beaches in the moonlight cast on the tiny island. But with that many people joining in one place comes severe environmental consequences. I was interested in the aftermath of this party, to photograph and write about the extreme waste left behind on the beach and impact on the local Thai people.

My travel partner and I were sitting in the airport in Rome discussing ferry times and total hours of travel to get to the event when a gentleman overheard us and interjected.

“Are you sure the Full Moon Party is still happening? The Thai King very recently passed away, and the news said any kind of celebratory occasions were cancelled.”

With a quick Google search we found that, to our dismay, he was right.

After 28 solid hours of travel, we could only laugh at our lack of foresight, and we planned to leave Koh Phangan within three days. Upon arrival at our hostel, the rumor floated around that the party was still going to take place and would start at sun down, even with an impending storm forecast. As the night went on, we watched the beachfront restaurants and bars fill up, and occasionally people would venture out to sit on the damp rugs and pillows set out previously when the rain stopped. Overall, about 5,000 people (who pre-booked and were in the same situation as us) came out to the beach, but the celebration was kept very low key with quiet music and minimal drinking to respect the month period of mourning for the King. Even though this tragedy had taken place, the Thai shop owners couldn’t afford to close down, but you couldn’t help but notice how they were all wearing black at this otherwise colorful event. 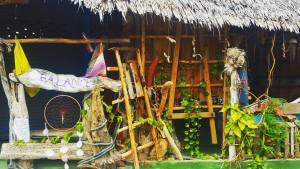 The next morning, I was curious to see the aftermath of the party on the beach, but to my surprise there wasn’t much to show because of how few people showed up. While this was in fact a good thing for the environment, I didn’t get to conduct my personal first-hand research on the full effect of the party. And unfortunately, the theme of ‘travel never going as planned’ continued: I came down with glandular fever plus severe dehydration forcing me into the only hospital on the island for two days. You may be thinking that in a developing nation (and on an island no less), the health care would be in less than optimal conditions. We had a motorcycle accident on the way over to the hospital (it just keeps getting better doesn’t it?), and I was extremely ready to get off this island. We then continued to the hospital, and I was absolutely astounded by the beautiful facilities and customer service at First Western Hospital. Nurses and doctors catered to my torn up knee as well as getting me cool towels to bring down my 104 degree fever. To my surprise, I was offered homemade Thai meals (not terrible hospital food) and given every comfort in my room. Maybe this trip wasn’t entirely hopeless?

Upon my release, we booked a hostel right next to the hospital called Wanderlust, where my entire experience turned around. There were only about 10 people staying in the hostel (which was usually sold out), and they lived there for the past few months. They shared their knowledge and insight of the island, introducing us to the hidden beaches, mountain top bars, and abandoned nearby islands where we encountered people and situations we never would have had there been thousands of people visiting. We learned about local Thai schools, talked to bar owners and heard their stories, made long-term friends with whom we traveled later in other countries, and ended up staying for a much longer period of time than anticipated. Three weeks flew by in sunsets, 20 baht taco nights, exploring markets, 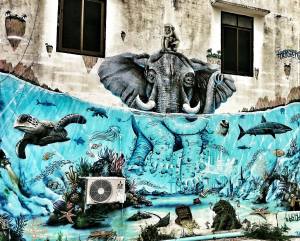 kayaking, discovering the love the Thai people had for their King of 70 years, drinking in restaurants with no electricity as torrential downpours sporadically occurred on beaches, plus so much more. I went to Koh Phangan with a set idea of what I would see and what I would take away from this tiny island, but I learned one of the most profound lessons which is now an important life motto for me: expect nothing and be flexible. What I once considered a series of unfortunate events, I now fondly recall as the experiences that opened my eyes to another side of a culture and peoples I never would have had the pleasure to know. 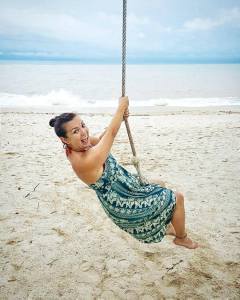 Veronica is an American living in Melbourne, Australia working as a virtual assistant and brand ambassador for eco-conscious tourism and hospitality companies. With a BA in Cultural Anthropology, she has visited over 25 countries and continues her passion for culture and travel by blogging. She plans to build a tiny house bus with her husband and use it as an off-grid café at festivals allowing them to travel around Australia. Follow her adventures on Instagram, Facebook, and Tumblr!