Ice, road trip, and no seatbelts? Sounds like a raucous and reckless adventure from the 1950s. If you’re yearning for an outdoor adventure this year, take a spin on Europe’s longest ice highways, connecting Estonia’s mainland to the island of Hiiumaa. This 26km long road spans the frozen Baltic Sea, but is no easy highway drive. For starters, one must keep between the speeds of 10-25km/h and 40-70km/h due to the phenomenon of ice resonance that may cause cracking. Seatbelts are not allowed. Why? Because, despite the feeling of being on a solid road, you’re still driving on sheets of ice that could, however rarely, crack, leaving the driver and passengers no choice but to make a speedy exit or drown. Not a great way to start a road trip. The longest ice road is by far not the only ice road Estonia has to offer. The road from Triigi and Tärkma is a 17km road over the Soela strait. 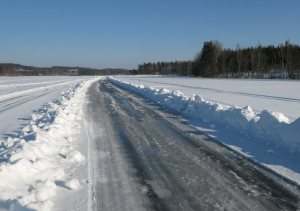 There are four other ice roads that Estonia opens for the season, the shortest being from Haapsalu to the Noarootsi peninsula in western Estonia (usually open first), and slightly less risky of a drive. An ice road to Piirissaar Island in Lake Peipus usually passable, while colder winters permit opening official ice roads on the Baltic Sea between mainland Estonia and the islands of Hiiumaa, Vormsi, Muhu and Kihnu, between the islands of Saaremaa and Hiiumaa and also between Haapsalu and Noarootsi. The route from Haapsalu – Noarootsi (3.2 km) is such a short trip that it makes the idea of a 40 minute roundabout trip in the summer almost laughable. 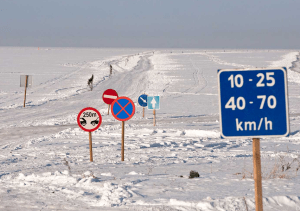 The feeling of freedom is incredible, skimming the frozen surface of the sea with nothing but white as far as you can see. There is no other sensation equal to it in the world (unless you traverse the longest ice road in the world, found in Antarctica).  Lean your head out the window and you won’t hear the much feared creaking and crunching sound one might imagine. Instead, it’s an eerily quiet and gentle wooshing of the sea winds as you drive forward over the frozen waves. If you’re hoping to navigate with GPS, it may not be possible. The program OpenStreetMap incorporates ice roads, but GoogleMaps may not. Luckily, there are no turn offs to get lost on and one can simply follow the tracks made by the adventurers who drove before you. In case of a snow flurry, however, pre-navigation planning is recommended. There are flags in place for guidance in case of such occurrences, but many choose to wait for a clear day to make the trip.

All the roads are open during daylight hours, usually 10am to 5pm, to avoid accidents occurring during hours of darkness when nuances of the road are harder to make out. The last thing you want is to be stuck in the middle of the sea with no lights, guidance, or hope.
Keep an eye on the Estonian Road Administration website (www.mnt.ee) for information on when the ice roads may be open. Some years they are open for weeks, other years they are only open a few days. In 2015, they were not open at all. Because the thickness of the ice must be at least 22cm thick, along the entire route, there is a risk of inconsistent freezing during warmer winters. More frequently, the ice roads are open in late winter, usually February-March.
If you’ve never ventured to Estonia’s beautiful islands due to the hassle of ferry times or logistics, the ice roads are a great alternative to head out on your own time. If you don’t mind the risk, it might be one of the greatest and most memorable road trips you’ll ever take in your life.

Ever taken the ice road less traveled? Let us know! (This article originally appeared on www.citypaper.lv)