Think you can’t get proper sleep on a plane? What if that plane was on the ground and you had a full, soft, amazing bed? And a sauna.
Good news, there’s a whole (literal) world out there of reclaimed and repurposed jets made into unique lodging destinations! 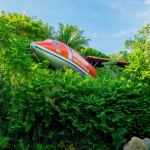 Hotel Costa Verde brought this modified 727 airplane from San Jose to the rainforest by the beach for stunning views.

Costa Rica’s Airplane in the Jungle
High in the jungle canopy in a coastal rainforest, Hotel Costa Verde, at $500 per night, is absolutely unforgettable. First of all, you might be able to hang out with sloths, monkeys and festive jungle birds. Second, you get to sleep in this impressively redone 727 airplane (complete with gorgeous teak wood interior). Since it is a smaller plane, there are only two suites. Looking for something more affordable but still with a view of the plane? The Hotel Costa Verde features bungalows, cottages, and houses, along with three pools and four restaurants with incredible sunset views. On the menu? Yellowfin tuna with passion-fruit sauce and amazing bbq!

Sweden Jumbo Hostel
For those who want to try sleeping on a grounded plane but aren’t ready to have the WHOLE PLANE to themselves, there’s this delightful Swedish plane hostel, Jumbo. Made from a decommissioned 747-200 jet, it’s also 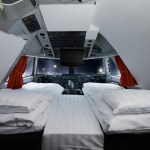 Fancy a nap in a cockpit? Whether or not you’re a pilot, anyone can sleep in Sweden’s Jumbo Hostel!

the most affordable option on this list at around $75 per night (more if you want the cockpit suite). The first class area is now a loungey bar area, and it makes a perfect stop if you have a long layover overnight and want to do something memorable, since it’s right at Arlanda Airport. Since it IS still a hostel, bathrooms and showers are in the hallway and shareable (minus the fancy people in the cockpit suite. They have their own). The café also has simple breakfast items for purchase and a microwave if you want to bring your own food. 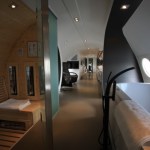 A saunas on a plane? Absolutely!

Netherlands’ Vliegtuigsuite
This plane hotel has one of the coolest background stories. The 1960 Ilyushin 18 was once used to shuttle the elite of the German Democratic Republic before unification. Flying such names as Erich Honecker (the man behind the building of the Berlin Wall) and German dignitaries, this pane is now a luxury suite built for two.
No need to share your plane here. Get the luxury treatment of a private plane (complete with sauna and Jacuzzi) including a kitchen! Air conditioning (and not just those little air vents above the seats) is also included. 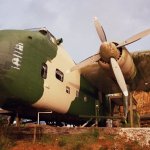 This Vietnam-era plane has been redone to include two hotel units, including the cockpit!

Glow Caves doesn’t make you choose because they have it all! However, the highlight here is the restored and converted 1950’s Bristol Fighter Plane (and proclaimed to be the last allied plane out of Vietnam) which has been turned into two separate motel units. With so much to see nearby (including tons of hiking), visitors may want to stay a while. 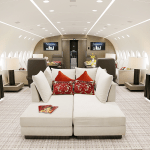 China’s Dream Jet
Kick off your shoes and fly a while. This luxury option of a hotel-in-the-sky may not be accessible to most travelers at $74,000 per hour, but if you’ve ever wished your flights were just like home, this is the option you want to go with. With room for thirty, this jet boasts an enormous shower, 42-inch TVs in the suite, a living room and dining room area, and, of course, glass sculptures by Dale Chihuly. It’s more than an airborne hotel, it’s a home.

Have you been to one of these plane hotels? Let us know! 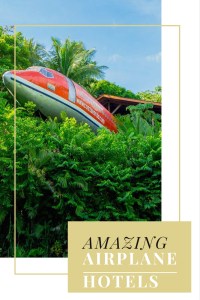